-life as a sketch- art is everywhere…

The last time I went to Paris I saw something I had heard about since 2007, a public bike system called Velib’! In my opinion this is a genius solution for the worldwide problems of urban congestion and pollution. Here’s how it works 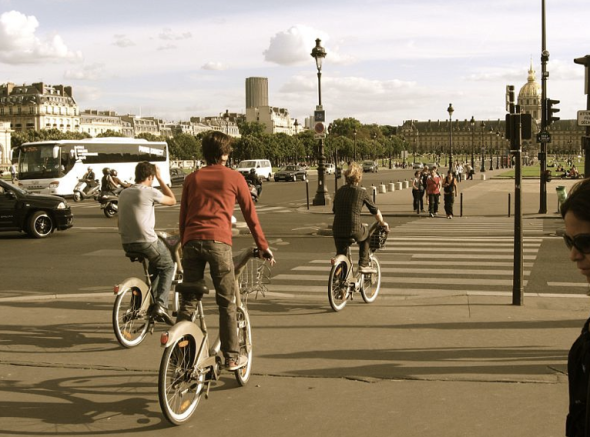 Seventeen thousand bikes are stationed at Twelve hundred stations all over the city.  You walk up to a station, swipe your card, get a bike, and you’re off! When you get to your destination you park your bike at a nearby station.  Once you’re ready to leave again you just repeat step one! This takes out all the hassle of owning a bike (theft, maintenance, storage) and gives you all of the pros of using one (exercise, less congestion, mobility)!

The question was, would something like this really catch on? The answer was a big fat oui!  Bikers on the streets of paris have doubled.  This has led to the need for expansion of the public biking infrastructure.  This in turn is having the real long term effect of reducing the number of cars on the road!

Now, the success of Velib’ is contagiously infecting other cities in Europe such as Barcelona.  Above is a video from faircompanies outlining their version of public biking.  More recently Canada has embraced this great plan as well!  Montreal runs a system called bixi (bike + taxi) and Toronto is in the process of doing the same!

Its amazing to me how some of the most complicated problems can be solved with something we’ve had for years. . . what else are we missing?